IRAN GETS THE MESSAGE – SANCTIONS HURT

There are plenty of indications that the efforts by the United States and other countries to isolate Iran economically are gaining momentum and having an impact. The most severe sanction to date went into effect earlier this month when the Society for Worldwide Interbank Financial Telecommunication (SWIFT) cut off services to 30 Iranian banks, including the central bank that processes Iran’s oil revenues. SWIFT is the world’s largest electronic payment system. It handles close to $6 trillion a day in cross-border payments. It acted in response to a European Union Council decision to impose asset freezes and other sanctions on individuals and organizations involved in Iran’s nuclear program. Reuters quoted Naser Shaker, who owns an oil and gas trading company in Dubai, as saying that SWIFT’s action “will make life even more difficult for us than before, because this is like our lifeline to the outside being cut. All the transactions will be stopped. Through the banks, there are no more options.” SWIFT’s decision was the latest in a long list of ever-tightening sanctions. Earlier this month, Bloomberg reported that sanctions had reduced Iran’s oil shipments by 300,000 to 400,000 barrels a day; that half of the oil tankers using Iran’s largest terminal in February did not complete their voyages; and that Iran pumped only 3.45 million barrels a day that month, the lowest level since 2002. Oil is by far the dominant factor in the Iranian economy, and reduced oil exports are having a major effect on individual Iranians. The currency has fallen in value by 50 percent in less than a year. This has had a devastating effect on personal savings as well as the prices of everyday purchases, especially anything imported. When it comes to popular support, “it’s the economy, stupid,” is just as true for politicians in Iran as it is here at home. 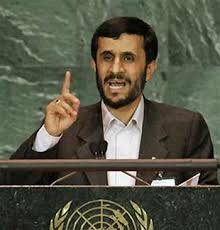 It is no surprise that the economic pressures caused by escalating sanctions are beginning to impact Iran’s President Mahmoud Ahmadinejad. He was recently called before the parliament to answer questions from lawmakers on his handling of the economy. It was the first time the Iranian parliament had ever required the appearance of a president to defend his administration’s policies. Probably the major dark cloud on the sanctions horizon is the possibility that they will increase oil prices as they did in 2008, when oil reached $147 a barrel and helped cause the worldwide economic slowdown.   It was therefore good news when Saudi Arabia, the United Arab Emirates and Kuwait committed to raising their oil production to make up for decreases in Iranian oil shipments. Their commitment was based on a number of considerations, but a major one was the heightened concern in the region about the implications of Iranian control of nuclear weapons. Here in the United States, we quite justifiably focus on the safety of Israel should Iran obtain nuclear weapons. But these three Arab countries, no friends of Israel, have their own concerns. Saudi Arabia, a Sunni nation, has been the target of repeatedly hostile actions by the predominantly Shiite Iran.

Last October, U.S. federal agents disrupted an Iranian-sponsored plot to assassinate Saudi Arabia’s ambassador in Washington, D.C. Many believe an Iran with nuclear weapons would push the Saudis into developing their own nuclear program. More nuclear weapons in more countries in this volatile area are a nightmare that should frighten everyone. China, the second-largest importer of oil in the world, has repeatedly resisted requests to join the sanctions against Iran, but it is showing signs of joining the effort.

Recently, the Industrial and Commercial Bank of China pulled out of an agreement to help finance an Iran-to-Pakistan gas pipeline. Up until now, Chinese companies have not joined U.S.-led efforts to impose economic sanctions. It is always difficult to gauge Chinese intentions, but this switch is probably an indication that the Chinese see that the sanctions are proving effective. Last week, in response to an offer made by European Union foreign-policy commissioner Catherine Ashton, Iran made a formal request to set a time and place for “constructive and serious” talks with the P5+1 — the five permanent U.N. Security Council members plus Germany. There is now a realistic chance that economic sanctions are having the desired effect and Iran may finally allow inspections to determine if they are developing nuclear weapons. That said, however, we must keep in mind that Iran has a fractured leadership and a very poor record of following through on negotiated agreements. If we are to be successful, we must keep the pressure on.